Topolino Snowboard Trophy actually rappresent the most important junior event in the world of snowboarding: over 170 young riders arrive in Marilleva (Val di Sole, Italy) from 27 nations. They meet and compete in half pipe and boardercross and socialize with other young riders from all over the world.

Boardercross finals were really good. Many runs (over 100) and a real adrenalic showcase for everybody, few injuries (just one relevant) thanx to a really good slope. On the start 2 woops, one jump, 2 parabolics to enter the 2nd jump…nice challenges in this first part of the slope, usually with the 4 riders very close until the second jump. After this 5 woops to pump the speed at top ando enter a small corner jump for a big parabolic and the 3rd big jump…really funny for riders and spectators. Filmer and photografers get crazy for that! Last part of the course consist of other 3 parabolics to enter the last 2 big woops and the finish line. The slope was nice and sufficently large everywhere.

We are waiting for the boardercross finals of the Topolino with its 25 national team. An important meeting to understand style and attitude of many countryes. After hours of agonism we arrive at the superfinals for boys and girls, divided in kids and youth. Swuiss boardercross school totally dominate the competition, getting 4 first place. Good performance from Norwegian Stian Sivertzen (2nd and really stylish on the slope) and from Maxi Stark (Ger) and Hermandez Regino (Spa). Feler Greta (Ita) obtain 2nd following Meiler Simona, the female youth winner. Really good competition.

Coming back to the hotel, kids continue to ride…a nice hand rail was finally attacked. It’s at the entrance of the hotel and I was wondering when this handrail will be done. Over 100 people take a look at this rail jam, winned by our filmer Fede, that close it in backside boardslide to fakie on 2nd try. Silence and respect for older riders, kids!

This are the finals result of Topolino 2006 boardercross.

Even if there was a little snowing during the night, many skyers (for one time) help us in the to shape again the pipe. At 9.30 am the slope conditions were good and training started. There was a news starting position for the run: 20m up the pipe, from the middle of the trees. This allowed the riders more speed for their first trick, obtaining higher airs! Really cool and riders really appreciate this variation.

For the kids, Rebecca Sinclair from New Zeland was really good! For the kids Men, the americans Diedorf and Tomlinson result the best two, followed by the young norwegian that run in t-shirt: Sami Ikonen (our favorite kids with the ducth Dimi). First of the Italians was Giancaleoni Giorgio from snow-park.it team, arrived 7th.

For the women youth swiss Aubry Emilie was absolutely the best with very hihg air and some very stilish 360. After her the spanish Castellet Queralt (probably thanx also to hers super funny coaches!) followed by the american Katie Williams. Great show from the Mens Youth, with many super taleted riders from Norway, Finnland, USA and Swiss. Really high on standars air, and many cool rotation like cab720, 900, some MK Twist…very good competition. Best wasTroy Tyler (USA), second our favorite youth Laari Likka-Eemeli, really stilysh and solid. 3rd another swiss, Friberg Daniel. The norwegian Sivertzen and Aanestad arrive 4th and 5th, they are really good and complete riders. First italian was Vacheggi 12th.

This are the complete ranking of the tropheo for the half pipe: 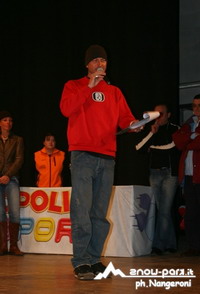 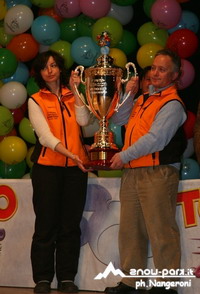 All the best riders of the event take their place on the podium and live the moment of glory! Boardercross and half pipe riders divided in 4 categories (Men Youth e Kids, Women Youth e Kids) went on stage e took their cup!

Finally the momento everybody was waiting for: the annuncement of the team winner of the Topolino Trophy…for another time the USA! 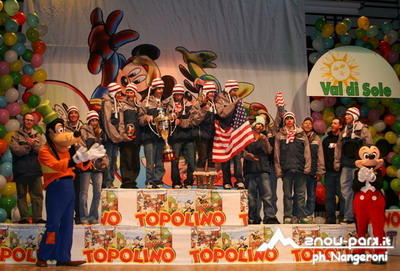 After 5 days of nice feeling, the event was finally complete! Riders, coach and staff will wait until march 2007 for the 10th edition of this international event! From Marilleva, that’s all!