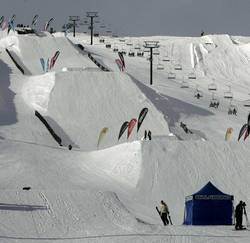 A view of the slope style track

The 3(three) Star TTR World Snowboard Tour event, the 2006 Billabong Slopestyle Jam was held from 25th – 27th August at Snowpark, Wanaka in New Zealand. The event marked the tours third stop drawing a powerful mix of international pros and local talent to the Southern hemisphere and with it exposing new talent to the already significant tour list of who-is-who in professional freestyle snowboarding.

In the Open category it was Canadian, Matts Kuli, and American, Jamie Anderson, who dominated the international field, out-riding their competitors and winning the men’s and women’s competitions. Their top results credited them both with 550 TTR World Tour points each and the coveted event title.

Contest format and riding infrastructure, created by Snowpark for the Billabong Slopestyle Jam, was rated as ‘World Class’ by the elated Canadian. Speaking shortly after the event, “The Slopestyle course was amazing. To have a mountain that is specifically designed like this is out of this World!” stated Kuli after earning event title for the season and posting his first TTR World Snowboard Tour result.

Kuli’s success was closely contended by NZ local powerhouse, 21yr-old Stef Zeestraten and reigning 05/06 World number 2, Risto Matilla(FIN), who placed a close third behind the internationally promising kiwi local. Zeestraten was awarded 518.26 TTR points for second while Matilla opened his 06/07 Tour account, notching up a cool 495.00 TTR points and is back in the Championship race.

In a consistent start to the season, Scotty Lago(USA) took 7th place, posting his 5th result in the 06/07 campaign, to sneak past former Tour leader, Danny Davis(USA), and claim his first ever TTR Tour Championship lead.

In the Women’s Open event, Jamie Anderson (USA), who has been in blistering form this season, crushed the female field, dominating the competition with huge technical rotation tricks and line combos throughout event. The American fended off 2005 defending champion, Izumi Amaike(JPN) for her win with Claudia Fliri(AUT) respectably settling for third place.

Anderson was delighted with her win. “I came to New Zealand to shoot my video part. As the conditions hadn’t been great for filming I thought I would enter the event”, stated Anderson, who lead the TTR Woman’s Tour following outstanding performances at the TTR 4(four) Star season launch, the Abominable Snowjam, at Timberline, Mt Hood, in July. Sitting in TTR Tour 5th position before the event, this title takes her back into 2nd position and striking distance of TTR Woman’s Tour leader, Ellery Hollingsworth.

In the Junior category it was Kiwi local, Mitchell Brown, that took the day’s honors after he qualified third for both the Junior and Open divisions. Holding his competition nerve, he locked down the day’s highest scored run on his first attempt. By holding back the rest of the new breed of ultra-talented new Zealanders, including juniors James Hamilton(NZE) and Andy Kennerly(NZE), Brown took the Junior title. The result see’s Hamilton and Brown qualify into the Billabong World Pro Junior Championships in France – a TTR 4(four) Star event which will be held in early March in Les Deux Alpes, France (www.billabongjrpro.com).

Brown and Hamilton will be joined by Rebecca Sinclair(NZL) who also dominated the Junior competition, only this time it was the women division. At only 14yrs-old, Sinclair, a shooting star on the National scene also contested the grommets division, placing a very respectable 7th. After claiming she “didn’t have a very good run in the grommets” she went on to take the title and with secured herself a place next to Brown as they travel to France for the Billabong World Junior Championships. Christine Prior (NZE) was second in the women’s Juniors event with Charlotte Trundle(NZL) filling the podium with a solid third place result.