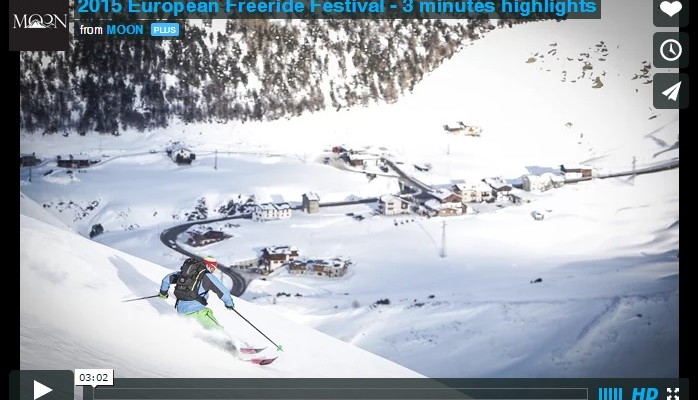 Winter is giving way to spring, snow is melting but the emotions aroused by European Freeride Festival are more vivid than ever. The fresh powder festival is narrated step by step in a video highlights, allowing everyone to understand deeply the philosophy of ‘Freeriding For All’.

A succession of happenings and faces at European Freeride Festival comes in a flux surrounded by the magical frame of Livigno. International guests from Europe, Australia, China and Japan tell their experiences from overseas with suggestive images and the expression of who keep intimately the snow in their own soul. The Freeride Film Festival gathers salient moments and witnesses of the freeride Bigs from ski, snowboard, splitboard, telemark, as well as speed riding, approached as both alpinism and heliski.

The freeride spirit leaves its track also in those who own a smaller experience and wish it to be widened:  European Freeride Festival was created with this purpose, to make powder suitable for all. Then the European Freeride Forum with workshops and artva camps, but also product tests in the Freeride Test Village, in order to understand the importance of safety as well as the know-how of techniques and technologies in the world of off-piste mountaineering.

A considerable chapter of the video is dedicated to Livigno Freeride World Qualifier 4*, the most important freeride skiing and snowboarding challenge in Italy for all 2015: breathtaking images tell of the instants of suspense lived by the 80 athletes, come from all over the world to conquer the podium.

Eventually, a special conversation with the legend of alpinism. Manolo inspires his audience with significant words above mountain and the possibility to live it in freedom but with awareness.

Are you ready for the second edition of European Freeride Festival? 2016 dates will be announced soon!European Freeride Festival is the powder event open to everyone with the claim ‘Freeriding for All‘. Ski, Snowboard, Telemark, Splitboard and ski-snow-alp. Not only professional freeriders but also enthusiasts can live the perfect experience during this groundbreaking event.

Livigno, the Italian ‘Little Tibet’. A holiday paradise for people who know how to choose. Livigno is one of the Alps’ most renowned tourism stations – VALTELLINA’S FLAGSHIP RESORT – and is set between the Stelvio National Park and the Swiss National Park. Over the decades the town has flawlessly preserved its environmental, natural and architectural characteristics. Way has been made for modernity but always in keeping with the local culture and traditions, and maintaining the surrounding areas as pristine as ever. This is why Livigno is paradise for anyone who LOVES HOLIDAYS CLOSE TO NATURE and wishes to spend time relaxing, breathing in fresh air and enjoying the mountain sunshine. All you need to feel great in Livigno is to take a look at the mountains that cradle the valley, and take in the impressive view of the mounts that roll gently from 3,000 to 1,800 meters. Livigno conveys PEACE AND SERENITY and is ideal for a winter or summer holiday taking strolls along foot and cycle paths or enjoying mountain biking and trekking, alpine skiing, snowboarding, telemark and nordic skiing. www.livigno.eu

European Freeride Festival is an event organised by Moon, the Italian communications and events agency specialized in outdoor and action sports, in collaboration with Livigno Touristic Promotion company.