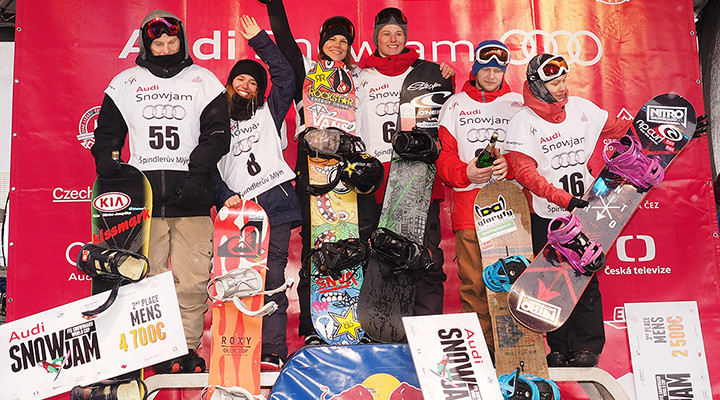 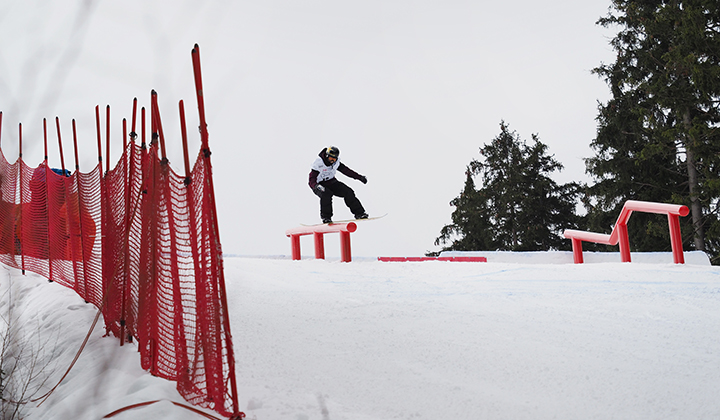 The last day of this year´s snowboarding World Cup, Audi Snowjam 2015, started with semi-final runs in both categories. Each rider had two runs, the better score has been counted. Three ladies out of six took the ticket to the final round, in the men category 4 out of 10 riders got into finals.

In finals, all riders had three runs, the best score counted. In the women category, Chery Mass from the Netherlands scored yet another victory an also became the overall winner of FIS WCS 2015. Klaudi Medlova took second place, showing her results from the season were reflecting her skills and form. Third place goes out to Ella Suitiala from Finland.

In the men’s event, two Czech riders were on the starting list. Daniel Porkert (age 18), who finished 10th, scored his best result in his career so far, also Petr Horak made his best result finishing 4th. The medals were taken by Petja Piiroinen (3rd), Janne Korpi (2nd) and Lucien Koch in first place. The overall winner of FIS WCS 2015 is Janne Korpi.

Šárka Pančochová-  „The riding was excellent, all obstacles were well prepared. I really like the setup of the track as it contains half pipe, corner, rails and a big air. I am happy for the organization and for the feedback from the public on site“

Petr Horák – „It was great, I really like the feeling here at home, the people were screaming and giving me the energy. I am happy for the result, lets go party!“

Janne Korpi- „I am happy that I landed the Cab Double Cork in the pipe since the pipe wasn´t really high so it was not easy to spin and I am stoked for it. The crowd was amazing and I enjoyed riding here. The last time I was here I didn´t go to the party, so tonight I am going to check it out“ 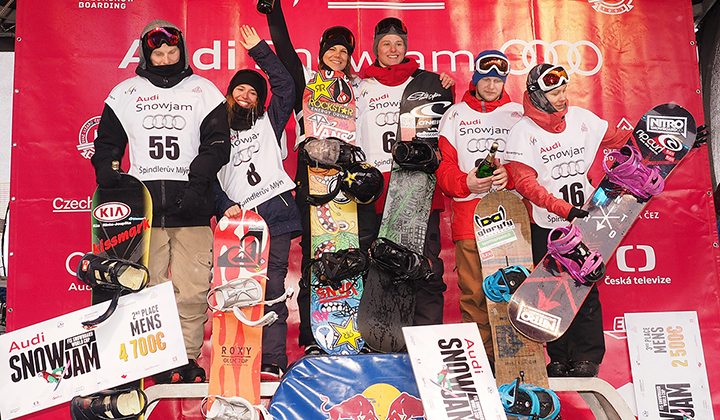 Cheryl Maas: “I had a great time here in Czech republic, the venue is very good organized. I feel like I am here to snowboard and to get results or anything I am just having fun and enjoying. It was very interesting to have a pipe on Slopestyle competition and I think it´s really good because it really shows that you can snowboard. I put down a pretty good score so I felt really confident.  It was so nice to snowboard here I was really enjoying the crowd going crazy when you coming down so it was really motivating to also make something good for them. And now it´s a time to party.“

Lucien Koch- „I am here in Snowjam for the second time and I enjoyed it a lot, I had a sick week with three or four great training days already. I like this course  a lot including the pipe, thats really sick. Two years ago I was riding pipe a lot, now I am riding more Slopestyle and I am really happy if I can combine those two. Its very original to have a pipe on a Slopestyle course. At the end of my winning run I had a pretty big Switch BS 1280 which I didn´t expect to land but I did and judges awarded me that I could win at the end. The crowd was pretty good, I have never been to a World Cup competition where the crowd was this crazy. And the prize giving? The crowd was just insane and I think the next year I am definitely coming back.“

Klaudia Medlová – „I am incredibly happy for the podium, moreover that the competition was in the Czech republic. It was the biggest crowd here from all events I participated in this year. I just made an air in Halfpipe as I am not strong in it, FS Flip over the lolly and FB Boardslide on rails with a BS Rodeo on the Big Air. I am satisfied, happy and really looking for the party.“