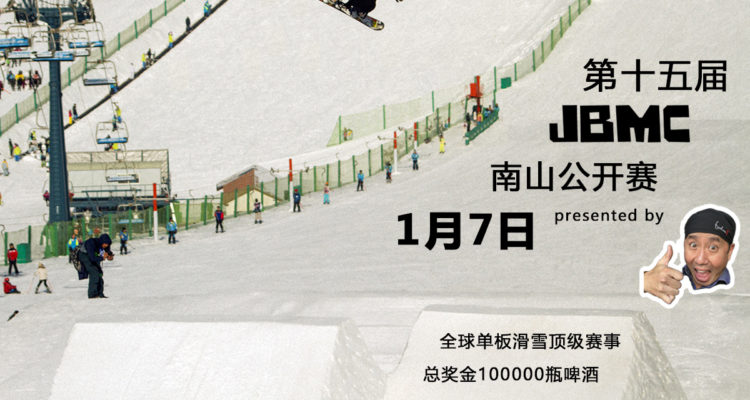 Eventually maturing into an international level event with big prize money and big names attending, the fame and glory isn’t for everyone, and #15 sees the competition escape those pressures in place of a more relaxed regional level event. Sponsored by event organiser Marco Huang’s brand JBMC and presented by local restauranteur and snowboard legend Alan Wong and supported by the Nanshan Mellow Park sponsors Union, Nitro, Shred Volcom and Demon, this step back allows those involved to relax more, some to compete in the event as they once did, and of course bring back the classic ‘Muwu’ after party tradition! Gan-bei!

Slopestyle. Open Event. Each rider (female and male) will have two runs; best single run counts. The top 8 will progress into the afternoon’s super finals for two runs each, best counts.

It began over a decade ago as the ‘Nanshan Open’, when a small group of friends threw the first snowboard competition ever held on Chinese soil with just a handful of riders and a case of beer as the top prize. As the contest has evolved and grew the following years, it earned global recognition in 2007 as a 3Star stop on the World Snowboard Tour. The Nanshan Open has ‘leveled up’ since then to International Level status, and is now the largest slopestyle competition in Asia on the World Snowboard Tour.

What the riders say…

“The Nanshan Open in China was amazing. From the moment we arrived in Beijing we
were taken care of so well. Amazing dinners every night, nice hotels and we got to do lots of touristy stuff… The comp was fun too, definitely one of my better snowboarding experiences” – Nick Brown, 2010

“It was for me the best competition of the season, really good time – whole week, good crowd, crazy parties… and I won!” – Mathias Weissenbacher, 2014

“Going to China was awesome. I broke my nose, split it open, jacked my ankle up, but I had a great time. It was a super rad experience.” – Hana Beaman, 2013