The 2017 World Rookie Finals went down with fantastic vibes as the quest to unveil the next Rookie snowboard superstars heated up when the world’s finest young snowboarders converged on Kitzsteinhorn, Kaprun, Austria. Around 140 riders from all over experienced a whole week full of snowboard action having fun in the Snowpark Kitzsteinhorn, and – of course – to battle it out for the famous and much desired title of the World Rookie Champion.

But Chase Blackwell from the USA and Japanese rider Sena Tomita, who both landed heavy runs, were better than the rest, and take home the Black Yeti trophies and prizes such as TSG helmets, Nitro bags, Surfcamp from Surftolive, Pieps, Shooting in Kitzsteinhorn Monday-Wendsday, Ticket for 2 weeks freeride trip to Chile, Pieps, shovel.

Slopestyle World Rookie Champions are Takeru Otsuka (JPN) and Kokomo Murase (JPN). High creativity level and crazy riding skills were sent by this years’ World Rookie Champions. On the boys’ side, Takeru Otsuka (JPN) topped the podium after having thrown a Blunt 270 on the first rail, a Frontside Double Cork 1080 and a Backside Double Cork 1080 over the jumps and finished his run with a Crippler Transfer to Nose Slide Prezel on the last features. He came slightly before Davide Boggio (ITA) and Minsik Lee (KOR) who became 2nd and 3rd. Best boy in the Grom category (below 16 years) was Swedish shredder William Mathisen.

Kokomo Murase from Japan defend the title as female World Rookie Champion from last year and impressed the judges with her winning run including a Blunt 270 on the rail, a Frontside 720 and Backside 720 on the kickers and a Rock to Fakie to Switch Board Slide on the last feature. She shared the podium with 2nd placed Antonia Yanez from Chile and Iina Puhakka from Finland who grabbed the 3rd spot. Check out the full results lists of the whole contest here.

If you are a snowboard fan or if your dream is to start a professional snowboard carrier, then Kitzsteinhorn, Kaprun Zell am See, Austria, is the place to be! Find all the info about the resort below: 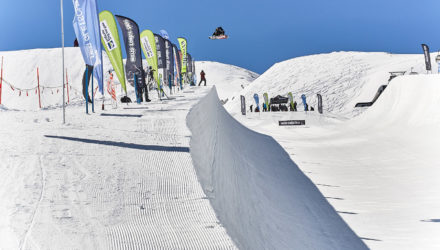 Black Yeti proudly announces dates and locations Someone said: “Optimism is the best way to see life”, and Black Yeti is highly optimistic! That is why we

We believe that for most of you snowboarding is