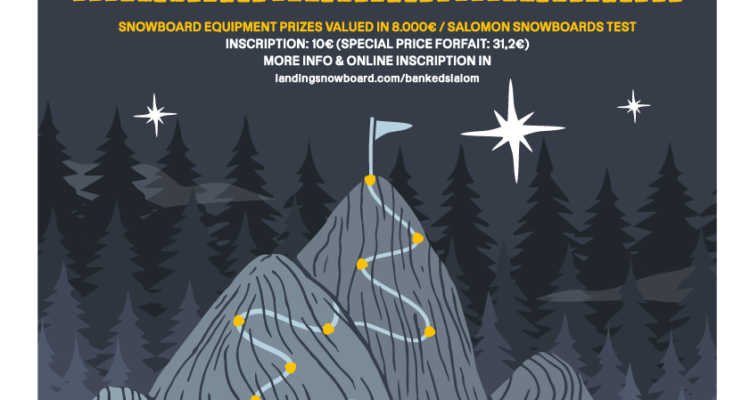 This season snowboard lovers have an unmissable appointment, next March 23rd, on the slopes of Baqueira-Beret ski resort (Pyrenees). A date set for all fans of this sport, who will come during that weekend to the Valley of Aran, in search of the adrenaline and fun that brings riding a Banked Slalom circuit.

Landing Snowboard, pioneering company specialized in snowboarding and splitboarding with more than 15 years of experience in the industry, organizes for the first time in Spain a contest of the ‘Banked Slalom Tour’ of the World Snowboard Federation (WSF) in collaboration with Quiksilver. The Banked Slalom allows you to go back to the roots of this sport, experiencing a unique sensation of turning in snow, reminiscent of the sensation of turning in water and cement.

The company, founded by two professional riders, Igor Domínguez and Javi Guimont, promotes snowboarding as a vital experience that helps to connect with nature and disconnect from civilization. With this initiative, says Guimont;

We seek to give visibility to snowboarding in a fun and inclusive event for all ages and genders. We wanted all snowboarders to be able to participate since frequently in snowboard competitions the circuits are designed with technical difficulties for professionals’.

The most technical part, the construction of the circuit, which will be located in ‘Era Marmota Snowpark’, will be duty of the Stadium team of Baqeuira Beret, led by Quique Quintero and in collaboration with Oriol Rossell, the builder of Landing Snowboard. Both have extensive experience in construction, standing out for their quality and innovation and are recognized figures both in the Pyrenees and abroad. 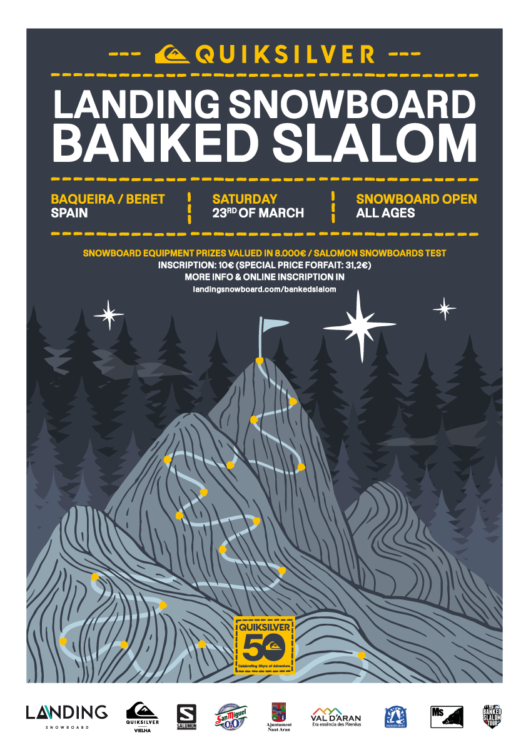 On this occasion the challenge for Quintero and Rossell is to create a fun circuit for all levels of riding, as the event is planned for the enjoyment of all audiences. A total of 8 categories, 4 male and 4 female and distributed by age: Groms (< 12), Rookies (< 18), Seniors (< 40) and Legends (> 40).

Registration can be done online at the Landing Snowboardwebsite, and will cost 10€. The prizes of the competition are valued in more than 8000€ in snowboard gear and activities, in addition, the station will offer a special price in its forfaits for the participants.

During this day dedicated exclusively to snowboarding, a series of complementary activities have also been programmed for the event, as Cristina Monclús, Marketing Manager of Landing Snowboard explains: ‘We will have a Salomon board test and the screening of a of Quiksilver’s Shaka film starring the professional snowboarder, Mathieu Crépel, and produced and directed by Morgan Le Faucheur’.

For this first edition of Banked Slalom, Landing Snowboard has the support of sponsors such as: Quiksilver, Salomon Snowboards, San Miguel 0.0, Ajuntament Naut Aran, Val d’Aran, Baqueira – Beret and the World Snowboard Federation.

Landing Snowboard is a snowboarding education project that was born in the glacier of Les Deux Alpes in 2004 and is currently based in Baqueira – Beret. Its founders, Igor Domínguez and Javi Guimont, are two professional snowboarders who have been involved in the teaching and development of this sport in Spain for over 20 years. Under the premise of living the mountain and snowboard in a more experiential way, looking for sensations that go beyond sliding on a board, they decide to launch a series of experiences ranging from snowboard and splitboard activities for all levels to specific freeride and freestyle activities, as well as a snowboard club for the youngest in the house: from 6 to 16 years.