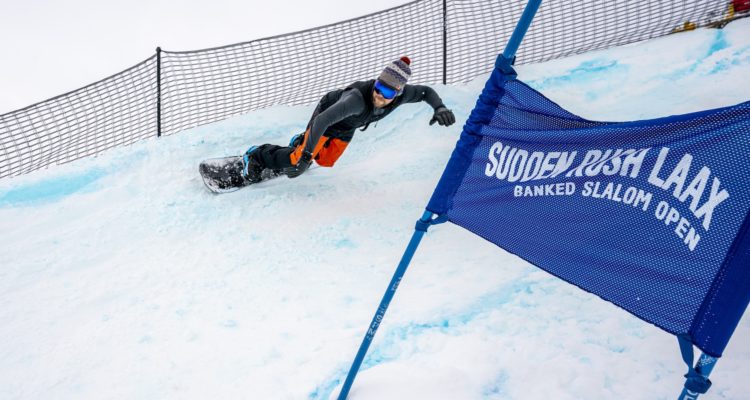 The sixth edition of the SuddenRush Banked Slalom LAAX 2020 hosted by Terje Haakonsen and Nicolas Müller, which is part of the WSF Banked Slalom tour 2019/20 took place successfully on 5-8 March 2020. Olympic champions, legends, former world champions, professional riders, amateurs and aspiring talents – everybody came together in LAAX this weekend to celebrate their passion for snowboarding. 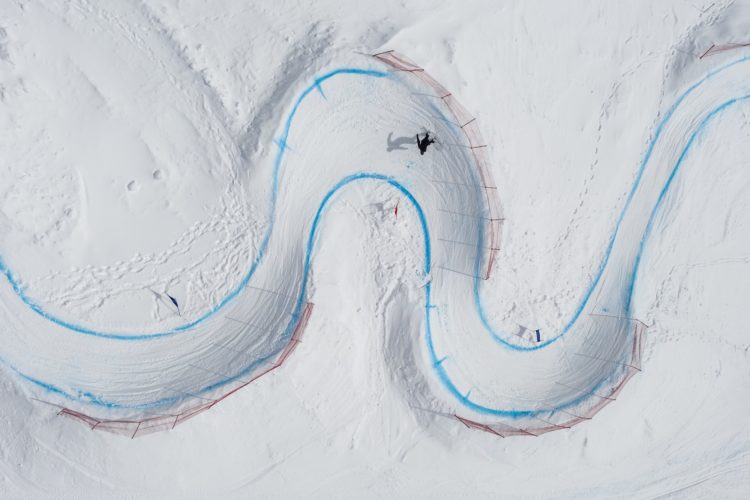 BANKED SLALOM EXCITEMENT – Terje Haakonsen and Laax local Nicolas Müller have now been hosting the SuddenRush Banked Slalom event in Laax for six years. In the event, the participants have to complete the 400-metre course featuring 20 banked turns as quickly as possible. The Banked Slalom dates back to the origins of the sport and has been celebrating a revival in recent years. The fascination with the event shows no signs of slowing down. Terje says: “Banked Slaloms are suitable for every rider, it’s kind of like riding a rollercoaster on time. It’s an honor hosting this event together with Nicolas at his home resort.” The age difference between the oldest (56) and youngest (6) participants is almost five decades. And this is exactly what makes the Banked Slalom so special. It feels rather like a meeting of generations. A coming together of the snowboard family, with riders from the early days through to the stars of today and the shredders of tomorrow.

The Banked Slalom competitions are arranged in a wide range of categories (17 in total). The riders line up at the start divided into numerous different age classes. Each participant performs two runs. Their best time is counted as their final result. 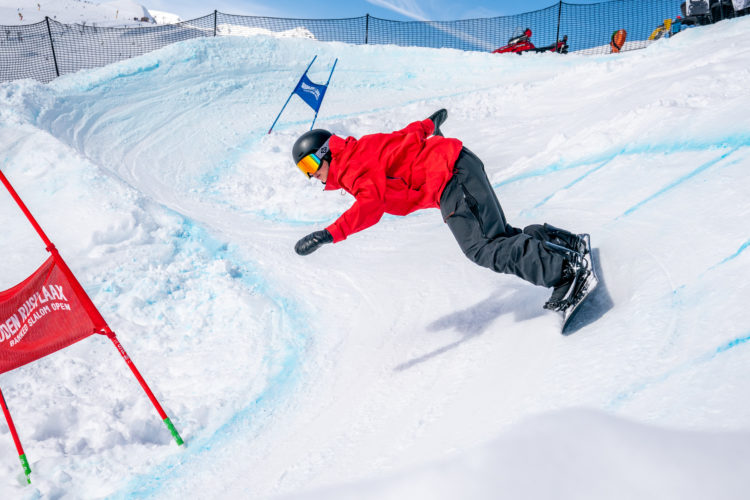 TOP STARS AND LEGENDS – On Friday, riders over 40 years of age, including a number of legends, lined up at the start alongside the top riders of today. In the Pro Women’s event, LAAX local Sina Candrian secured victory for the first time ahead of Karleen Jeffery-Barlia, who has a wealth of banked slalom experience, although primarily in the Mount Baker Legendary Banked Slalom event. The previous year’s champion, Chloe Sillieres from France, took the final spot on the podium. In the Pro Men’s competition, 45-year-old Reto Neiger from Switzerland claimed the title ahead of Christian ‘Hitsch’ Haller and snowboarding icon Travis Rice (USA), who was taking part in his first SuddenRush Banked Slalom. “I was aware of this event for many years, I’m psyched to finally be here.” 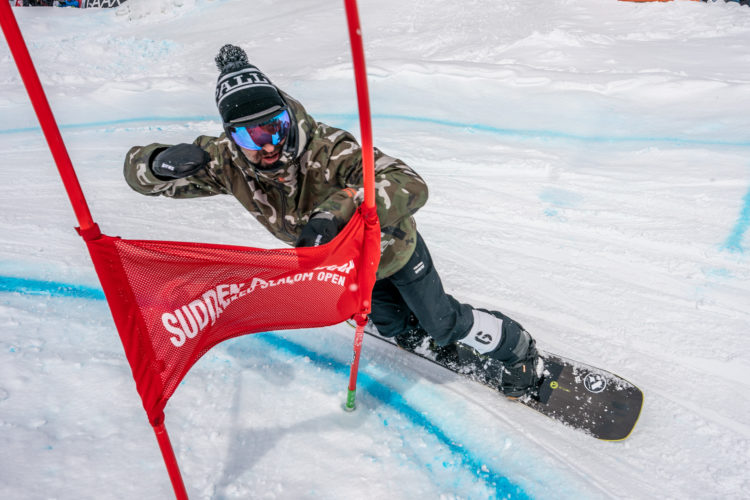 In the Super Masters Men (50+), Peter Bauer (53), who was one of Europe’s first snowboarding professionals in the 90s, showed his class once again. The Bavarian was well ahead of the rest of the field in his category. Thomas Scherrer (47) claimed victory in the Grand Masters Men (45-49), while Grindelwald native Pascal Imhof took top spot on the podium for the second year in a row in the Masters Men (40-44). His wife Murielle Imhof was victorious once again in the Masters Women (40+) ahead of Austrian Nici Pederzolli and Olympic champion 2006 Tanja Frieden.

OPEN TOP SPEED – On Saturday, the action continued with the Open class for amateurs aged 18-39. This is traditionally the category with the most participants. Svenja Schallner (25) came out on top in the Women’s event, while Alex Rufibach (35) reclaimed the title he won in 2018 in the Men’s. He also caused a sensation in the coming together at the end of the day when the top three to five riders from each category went up against one another again to determine the fastest riders across all categories in the ‘Fastest Run’ race. Rufibach unexpectedly overcame the top pros and master riders to take his place on the top of the podium for the second time of the day, with Reto Neiger, Pascal Imhof and Travis Rice coming in just behind him. 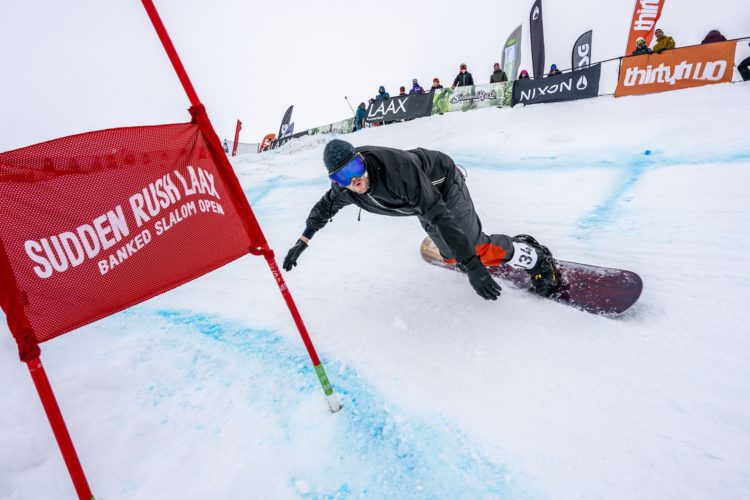 KIDS & FAKIE RACE – On Sunday, as is tradition, the spotlight was on the up-and-coming talent, and the young participants enjoyed a day of bright sunshine on the course. Every year, the young stars astonish the spectators with their skills on their boards, showing they are every bit the match of their older counterparts. They fearlessly mastered the banked turns with a smile on their face. Paula Bauer and Lura Wick came out on top in the Girls’ events. In the Boys’ events, defending champions in their age classes Nico Bondi and Jonas Hasler made it to the top of the podium, having also done so the week before at the Burton US OPEN Juniors. The teenager class (14-17 years) was won by Leonie Hasler and Julian Furrer. 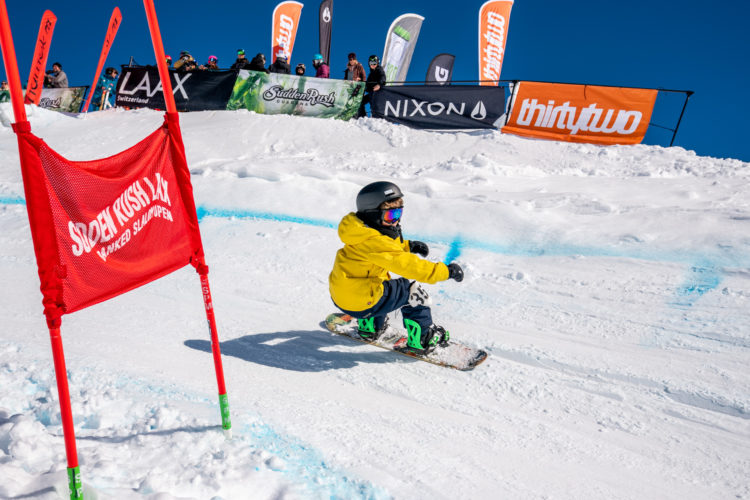 The fakie race then brought the event to a close. This is a prestigious title for the riders, where they have to navigate the course backwards. David Hablützel showed his class here, finishing several seconds ahead of the rest of the field. “I’m fit. And I’m fast. Very fast,” he said at the start.

At the end of the day, all of the riders celebrated their passion for the sport and cruised through the course together. Simply sensational! As Reto Poltera says: “The Banked in LAAX is like a surf session at the sea!” This was SuddenRush Banked Slalom 2020 in LAAX. See you next year! 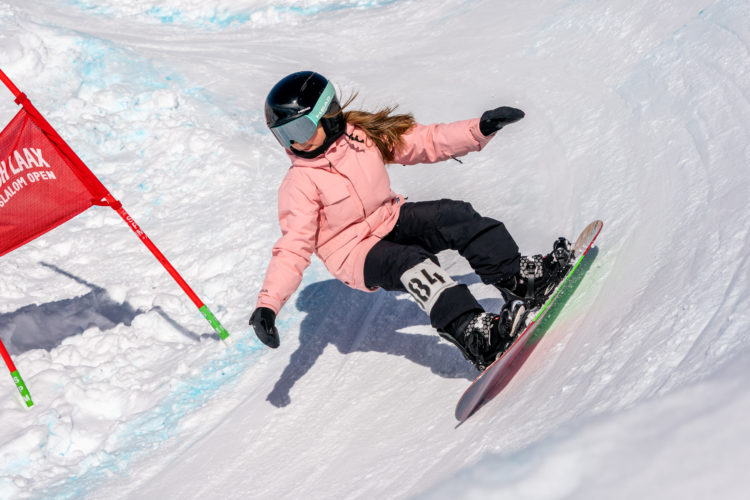 Check out also the video playlist on the LAAX YouTube channel.

The annual SuddenRush Banked Slalom LAAX 2020 hosted by Terje Haakonsen and Nicolas Müller is taking place since 2015 in the beginning of March. With this event, LAAX brings the roots of snowboarding into the present day. Aged between four and sixty-four or more the riders’ field is made up of park shapers, pro riders, former world champions, boardercross specialists, alpine legends, leisure boarders, Olympics and, of course, host legends Terje Haakonsen and Nicolas Müller are personally on-site.