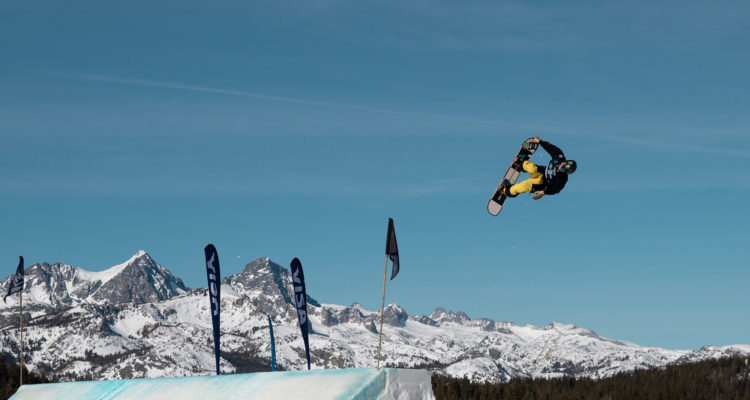 Andrew Gauthier from the U.S. Snowboard Team takes a look back at the 2019-20 season and shares a sum-up of the highlights. It has sure been a successful season for the U.S. riders. See for yourself below:

The first athlete to find success for the U.S. Snowboard Team was Chris Corning. His hard work during off-season training camps and in the gym put him in a position to kick off the season on a high note. He took to the big air circuit with a sense of drive and mental toughness that’s difficult to imitate by his fellow competitors. Chris wasted no time defending his title in August at the Winter Games NZ World Cup by landing his signature backside quad cork 1800 melon grab on his second run.

Chris carried this momentum into November and the heart of the FIS Big Air World Cup circuit where he earned a pair of third-place finishes in Modena, Italy, and Beijing, China. Moving into the Visa Big Air Presented by Land Rover, the final World Cup big air of the season and the first-ever internationally sanctioned snowsports event in the southeast, Chris was the FIS Big Air Cup Standings leader, just ahead of Canada’s Nicolas Laframboise. In a perfect storybook ending Chris stepped up on his last run to deliver the first-ever quad cork 1800 on a scaffold big air jump and take the victory, just one position ahead of Laframboise in second place. Chris’s win secured him the big air Crystal Globe.

Olympic gold medalist Red Gerard also found early success at the Winter Games NZ big air earning second-place before linking together a series of impressive slopestyle results at all four of competitive snowboarding’s most prestigious events. Reminiscent of the 2018 PyeongChang Winter Olympic Games, Red won the Dew Tour on his last run. Red also earned second-place at the Laax Open in Switzerland, as well as third place at Colorado’s X Games Aspen 2020 and the U.S. Open at Vail. However, Red wasn’t the only U.S. Snowboard Team athlete to step onto the podium at the Open.

With the world watching and memories of the late Jake Burton Carpenter flowing through the minds of fans and athletes alike, U.S. Snowboard Rookie Team member Dusty Henricksen took to the slopestyle course at the U.S. Open and made snowboarding history. Coming into finals as the first-place qualifier, Dusty landed the first-ever backside quad cork 1800 in slopestyle competition to close out his run and take second-place. Dusty also claimed victories at the Youth Olympic Games (slopestyle) and the Land Rover U.S. Grand Prix at Mammoth Mountain, Calif. (slopestyle) to solidify a breakthrough season for the 17-year-old. Dusty would finish third overall in the FIS Slopestyle Cup Standings and on top of the NorAm slopestyle and big air rankings.

For the women of the U.S. Snowboard Slopestyle and Big Air Team, Jamie Anderson set the bar. Although Jamie struggled early in the season in big air competition, those performances were quickly forgotten as she reached the podium in every competition she entered for the remainder of the season until the final event at X Games Norway 2020. Having podiumed in every X Games slopestyle event she has ever participated in, Jamie remained podium-perfect at X Games Aspen 2020 with a gold medal in snowboard slopestyle. She went on to win the Land Rover U.S. Grand Prix slopestyle at Mammoth Mountain, Calif. with her friends and family looking on in the finish corral. She then won her 11th Dew Tour Slopestyle Championship. Finally, Jamie earned her fourth consecutive contest victory with her eighth U.S. Open slopestyle title, dedicating her win to the late Jake Burton Carpenter.

Back to competition, U.S. Snowboard Pro Team member Julia Marino collected a marquee win at the 2020 Laax Open. After finishing fourth two years in a row, Julia put down a beautiful first run including a backside 900 that she only learned a week before at a team camp in Park City. Julia also earned bronze at X Games Norway 2019 in big air.

In halfpipe, Maddie Mastro led the way collecting podiums at both editions of the Land Rover U.S. Grand Prix at Copper Mountain, Colo. and Mammoth Mountain, Calif. However, at Mammoth, she had a special treat for her home resort crowd, stomping her double crippler for the first time in competition since her win at the 2019 U.S. Open. Maddie also earned third place at the Secret Garden, China World Cup and second at the Dew Tour modified superpipe, where her style and creativity set her apart from the rest of the field.

For the men, it was Taylor Gold who carried the spark throughout the season. Taylor joined Mastro on the podium at the Land Rover U.S. Grand Prix, landing a signature trick of his own, a double Michalchuk 1080, dubbed the “Chuck Taylor” by teammate Chase Josey. Taylor landed the Chuck Taylor for the first time ever in halfpipe competition at the Laax Open earlier in the season, where he finished in third place and his huge amplitude, unmatched style, and textbook execution lit up the crowd. Taylor finished seventh in the FIS Cup Standings. For the past five years, he has been battling back from a shattered knee cap, but Taylor is back on top and the field is on notice.

Even with a collection of top-three finishes from Maddie and Taylor, the highlight of the season for the U.S. Snowboard Halfpipe Team had to be the American sweep of the inaugural men’s superpipe session at X Games Aspen. Any snowboarder will tell you, the sport is not only about winning, but the pure joy of riding with style and having fun, and that’s just what this event was about. Taylor and teammates Toby Miller and Jake Pates took to the superpipe and laid down a sequence of hand plants, lip tricks, gator rolls, and tricks that were mesmerizing to watch. It resulted in Taylor earning the gold, Jake Pates the silver, and Toby taking home the bronze, proving not only can U.S. riders reach the podium, but also put on a show.

When looking back on a season, performances on the World Cup level are important, but not the whole picture. In a sport that progresses at a rapid pace, the athlete pipeline is critical to developing the future. The future of the U.S. Snowboard Team looks to be a bright one, highlighted by rookie team riders taking to the NorAm circuit and finding success across each discipline. U.S. Rookie Team members Dusty Henricksen and Ty Schnorrbusch claimed the slopestyle and big air titles. U.S. Rookie Team member Tessa Maud claimed the halfpipe title for the women, while teammates Jack Coyne, Lucas Foster, and Jason Wolle, all finished in the top-10.

The 2019-20 season brought a level of success across all disciplines, for both men and women, and pro and rookie team athletes. Just as personal style and diversity are respected within the snowboard industry, the U.S. Snowboard Team also fosters a culture in which everyone’s differences create an environment that leads to collective team success. From Red Gerard to Faye Gulini, the skill sets and qualities that make up the U.S. Snowboard Team are unique, but necessary to foster an environment of progression and winning. This culture is in place at U.S. Ski & Snowboard as we take one step closer to the 2022 Beijing Olympic Winter Games.